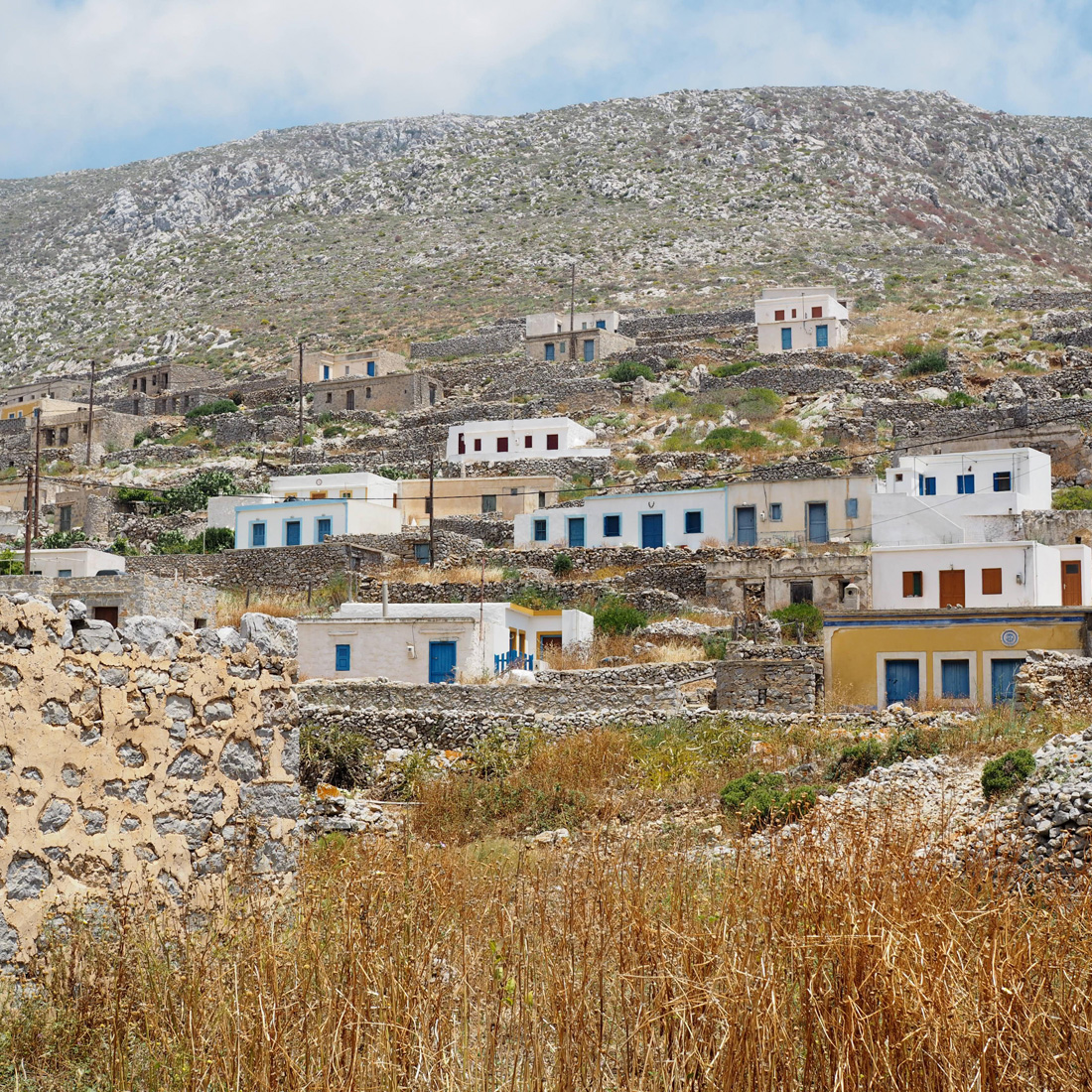 Our itinerary in the north of Karpathos including Greece’s most authentic village : Olympos, Karpathos

As you probably saw on Instagram, my friend Vicky and I spent quite a long time in Greece. After Rhodos for three days, our cruise on the MS Europa 2, Athens for 2 days we finally ended our trip on the east part of Greece on Karpathos island.

On the very first day on Karpathos, Vicky and I met with locals who showed us around the north of Karpathos, by car, feet and boat.  The village of Olympos on Karpathos was definitely a highlight of the trip.

We started in the very south part and drove up to the north of Karpathos with a first stop at Argoni to find one of the many endemic species that you can find in Karpathos only : the frog of Karpathos. FYI, Karpathos does a great job in protecting the flora and fauna so there is great species to see on the island. 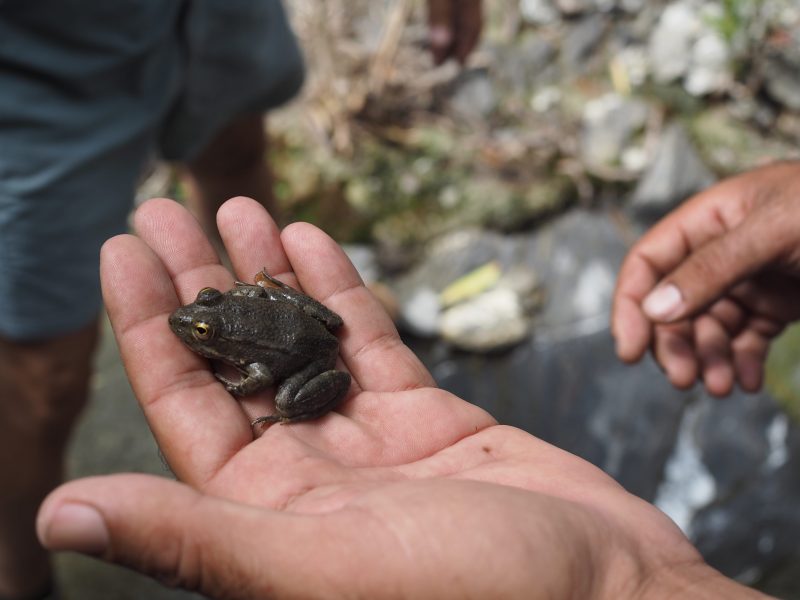 On the way, we drove pass a farm where an older women showed us her sheep farm, how she is milking sheep and I drunk for the first time milk that directly came out of a sheep. I already knew, Karpathos would be quite interesting. 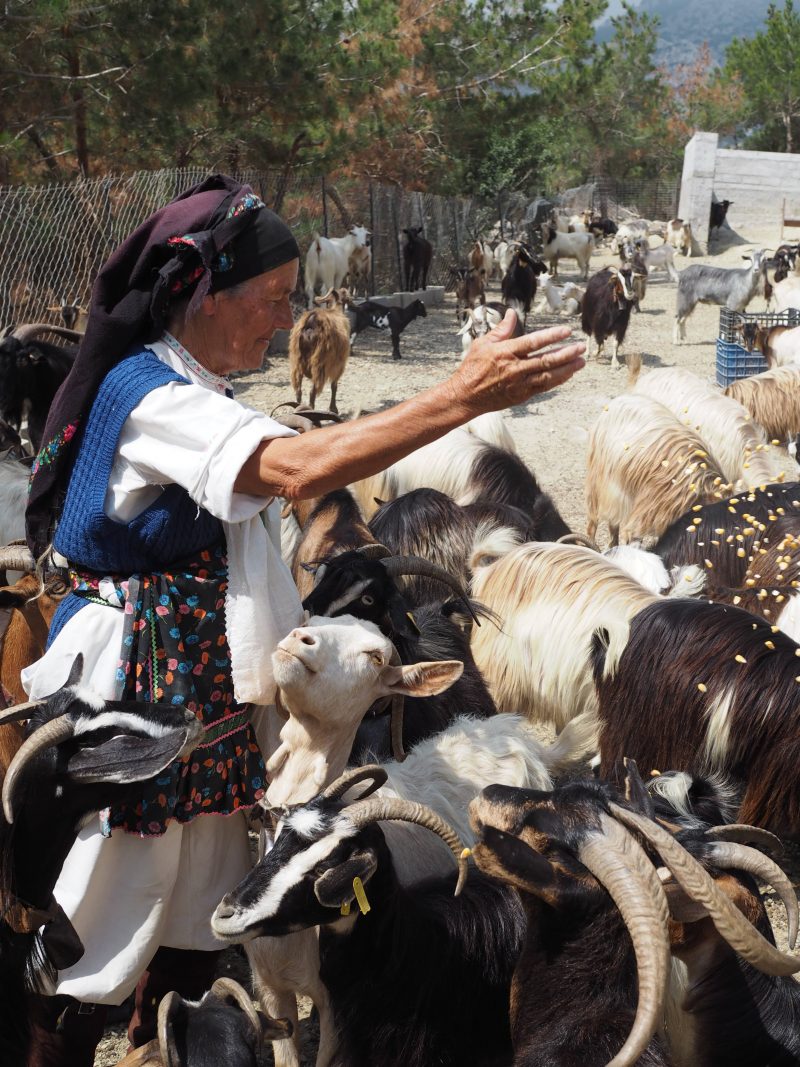 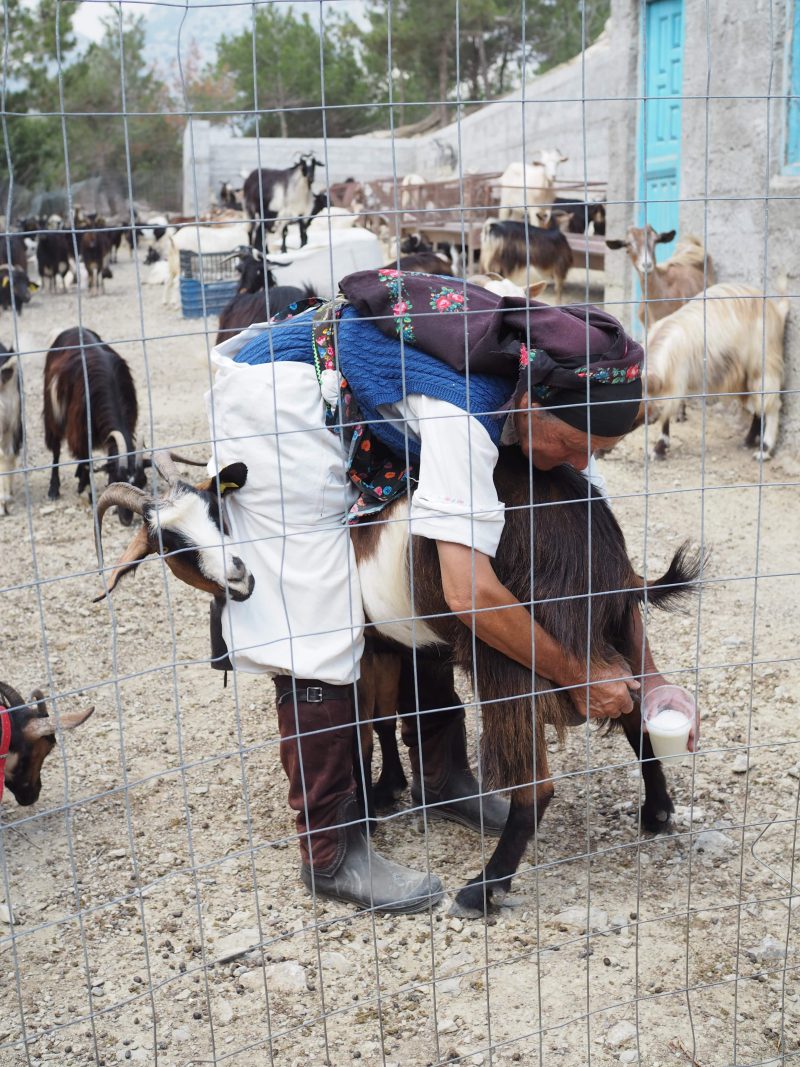 We drove further and had lunch in Avlona, a rural area which’s landscape is really picturesque. You have to imagine a mountain scenery, in the middle wheat fields (indeed the main production in the area is wheat and barley).  Little houses called Stavlos.  And in the middle of this, you have all those women working in the fields in traditional clothes.

Avlona and Olympos that we visited later on profit from a rich heritage and are the only places in Greece where people still wear traditional clothes. The locals like to say that the time has stopped there. 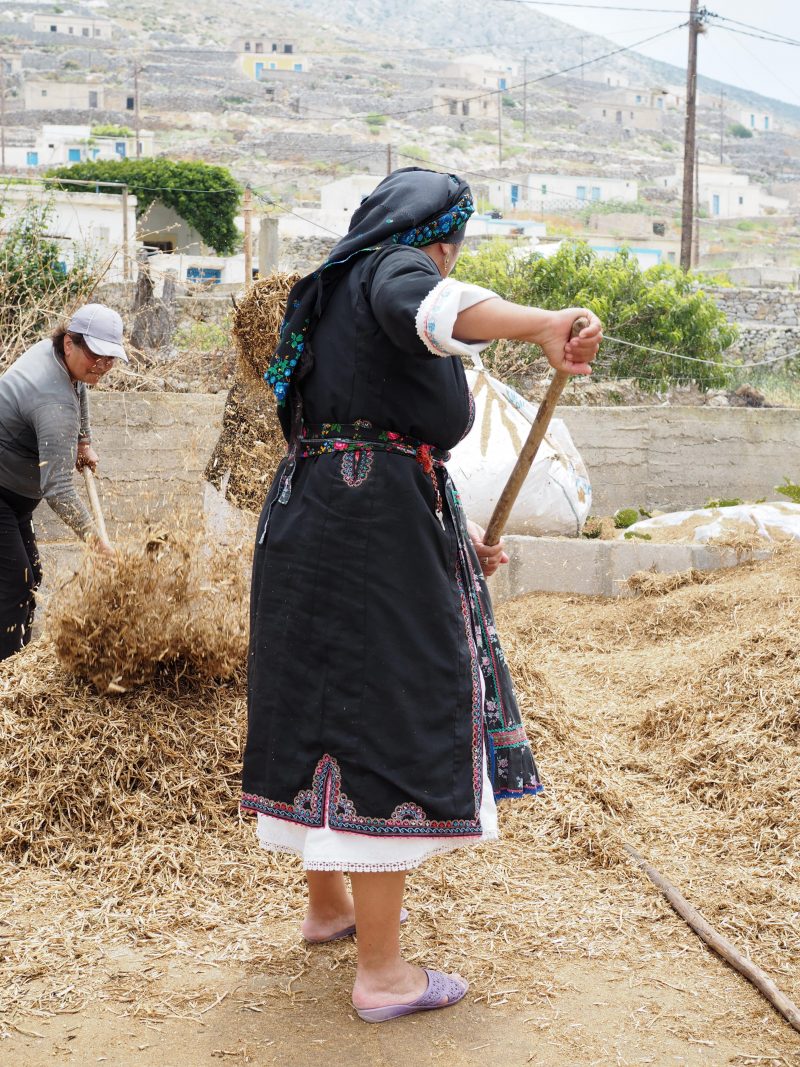 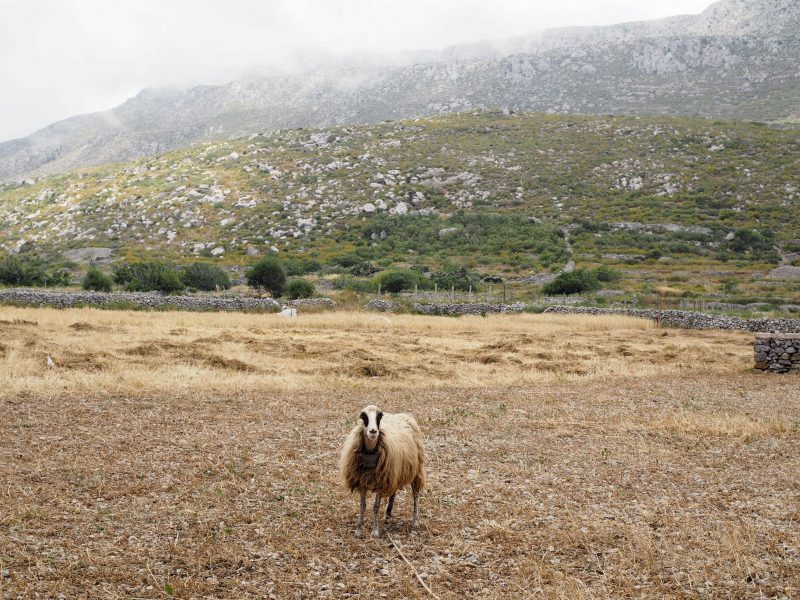 After lunch,we drove up the perfectly curvy roads of Karpathos Island to take a boat in Diafani, a small port village. The boat took us to many cave in the area as well as a pirate village at Palatia of Saria where the first inhabitants of Karpathos Island moved to in the 6th century. There you can still see ruins of the typical buildings but also a very nice pebble beach that is definitely a hidden gem as it is only accessible by boat or for hikers. There you will be able to admire the typical Karpathos blue (it looks just like on the pictures, I did not put any photoshop effect) just for yourself.

Unfortunately because we were a bit short in time, we missed Tristomo, also on the island of Saria. Many locals told us it is impressively beautiful. So make it there if you can! 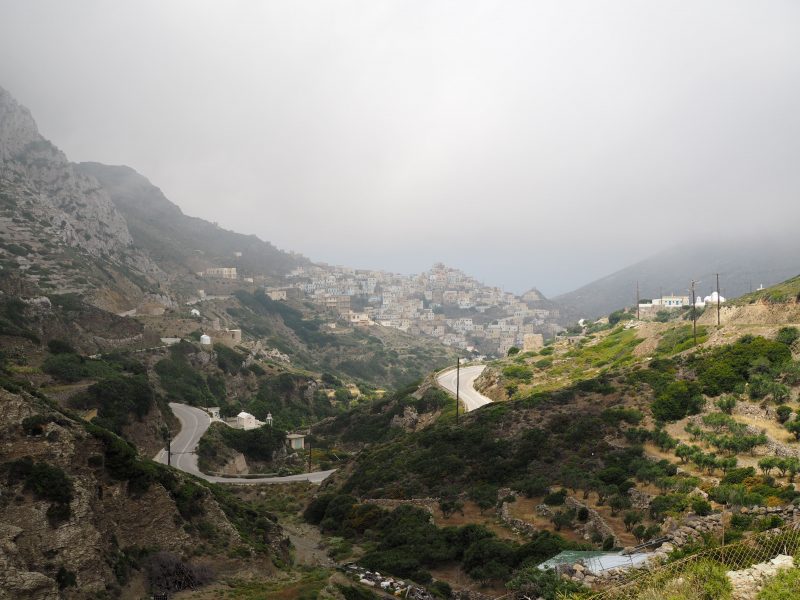 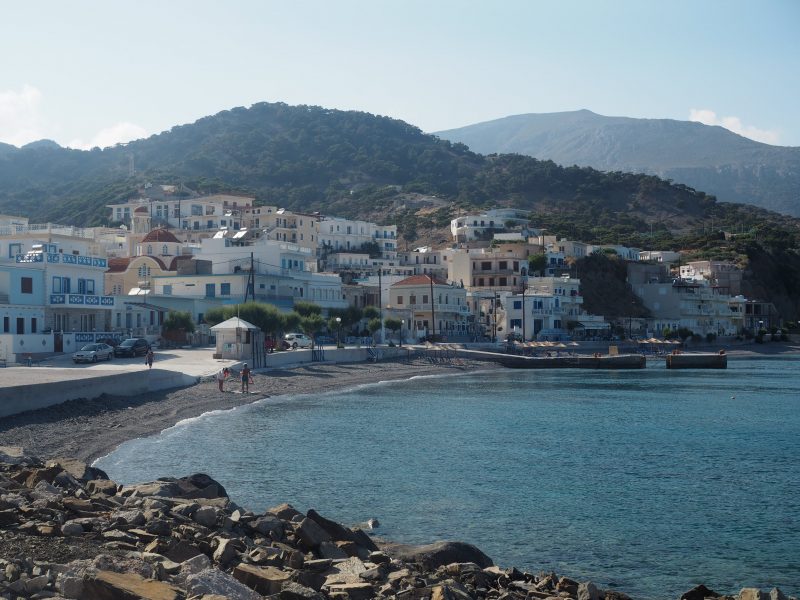 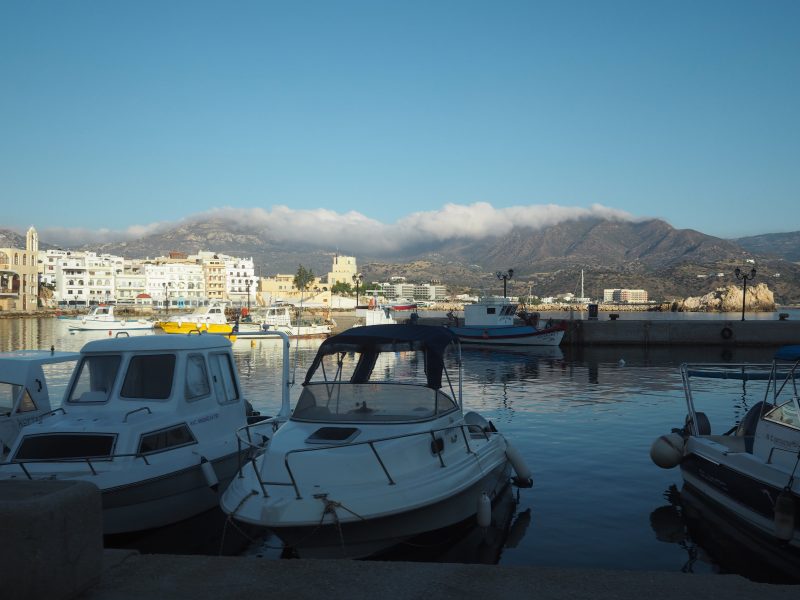 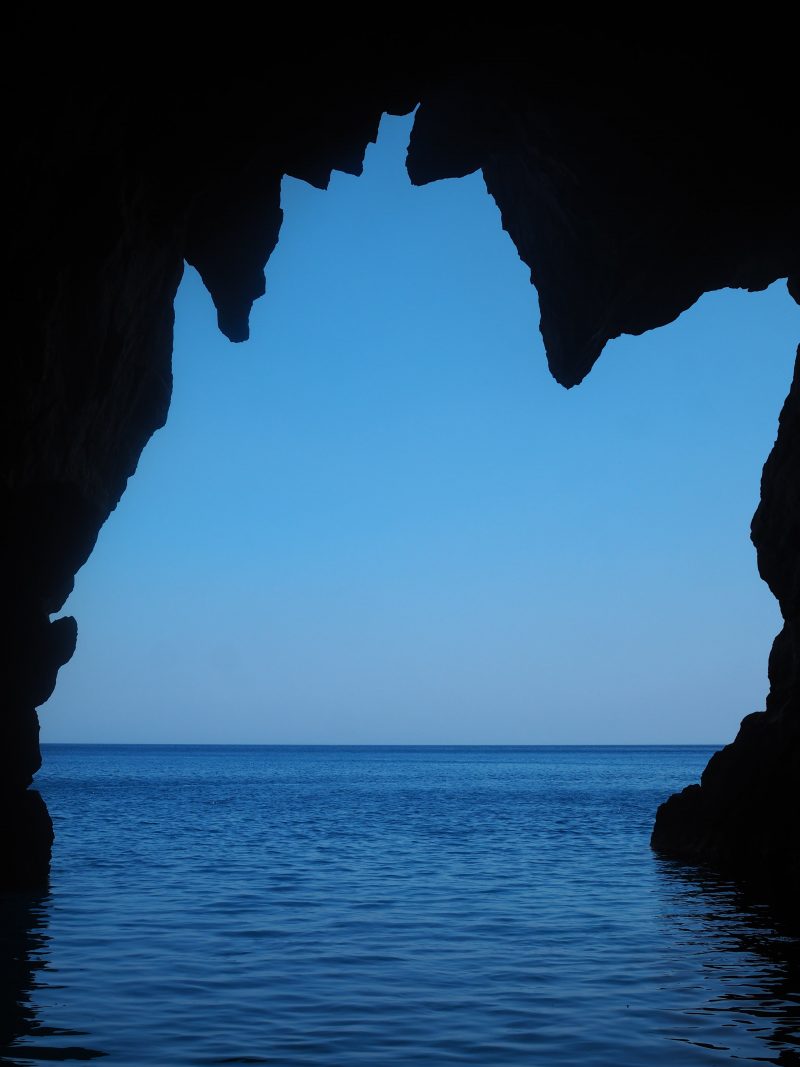 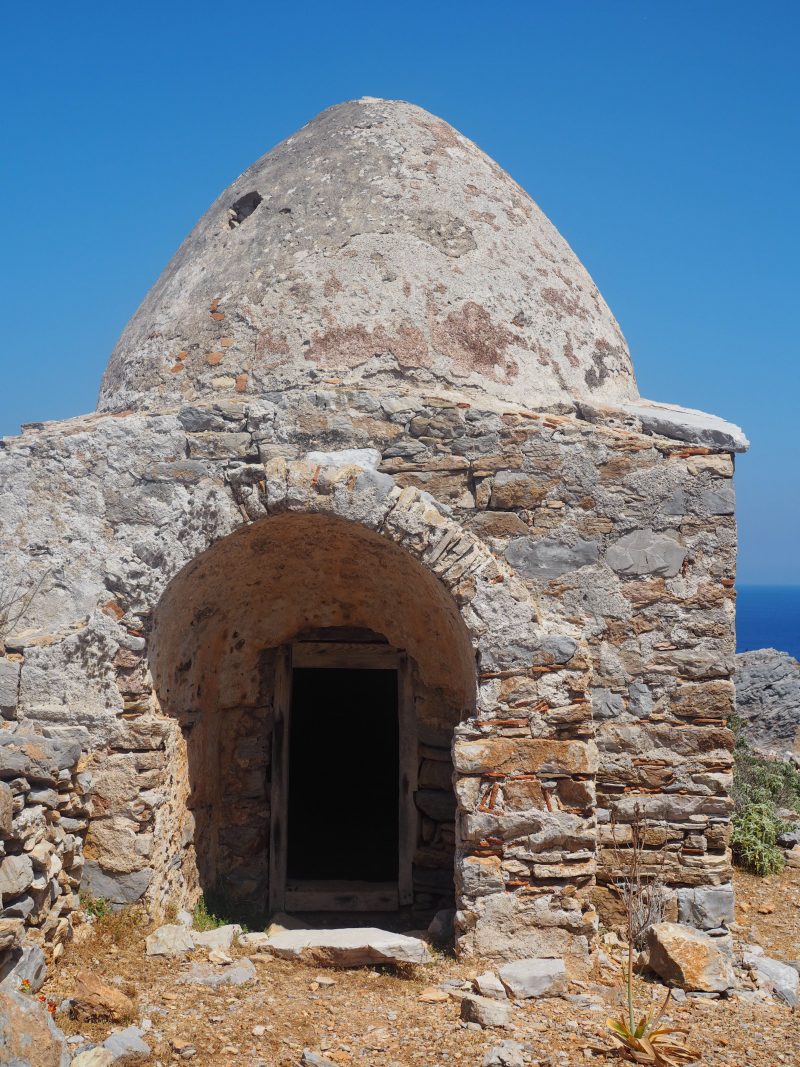 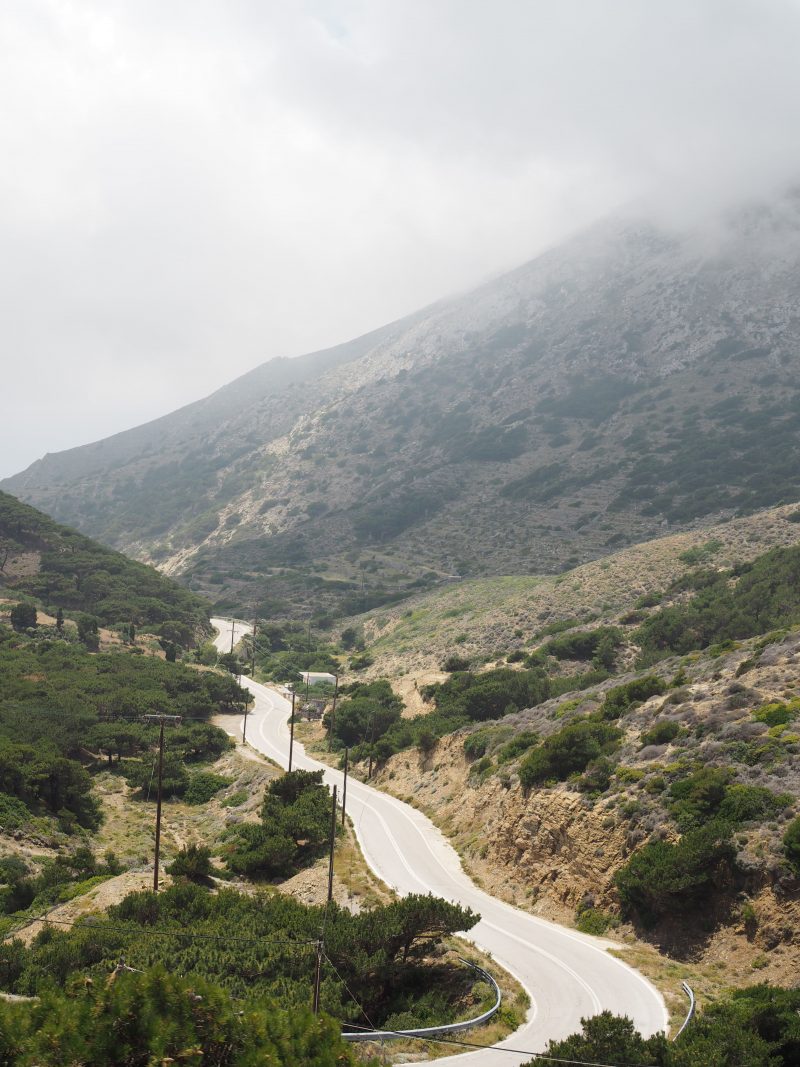 The village of Olympos |Karpathos

Later on, we went back to the port and took the car back for sunset and dinner in Olympos, Karpathos : Greece’s most typical village.

Olympos because it is so authentic and picturesque can be quite touristy so it is best to go in the evening. We went there at around 6pm and it was very quiet. Olympos is the highest village on Karpathos, at 700m high so you have amazing views from there. 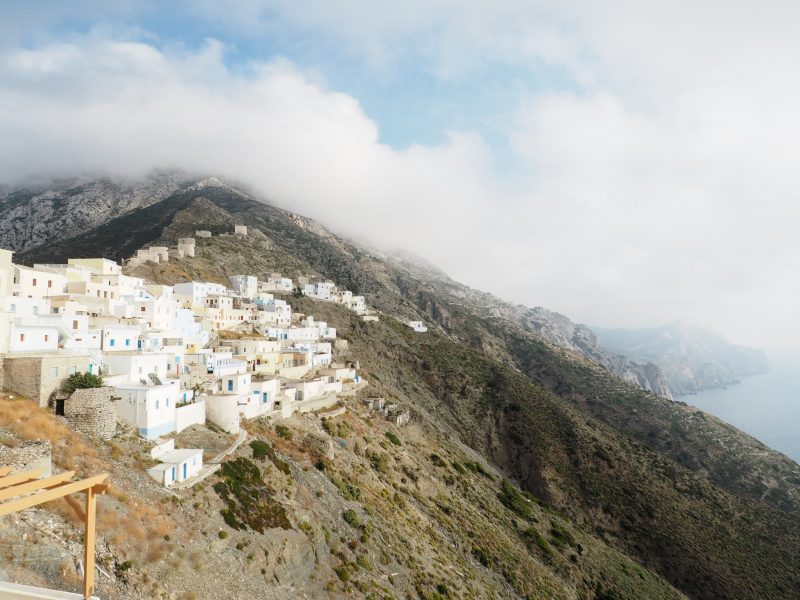 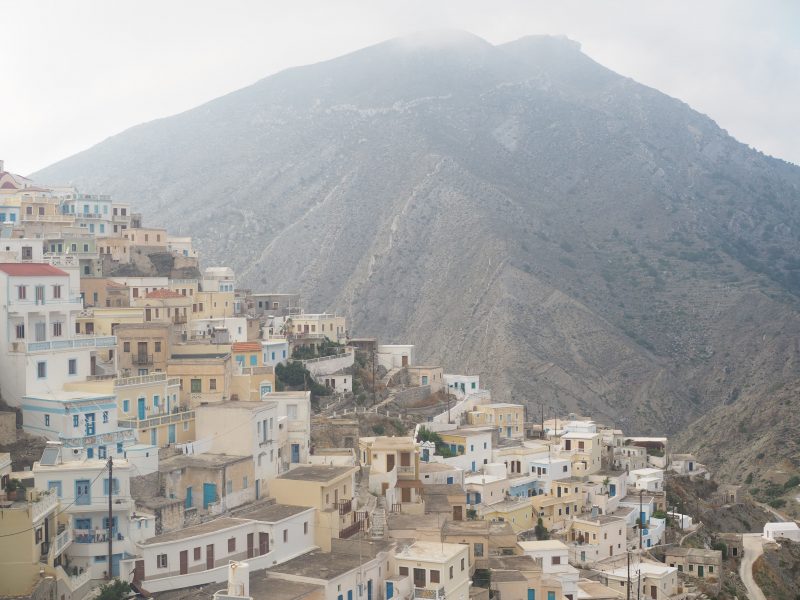 We walked around the village that is a live museum. We could see the typical U shaped windmill where they process the wheat and barley that grows in Avlona, and of course the women of Olympos wearing their traditional costumes. We even entered one of their typical houses with traditional “soufas” bed. 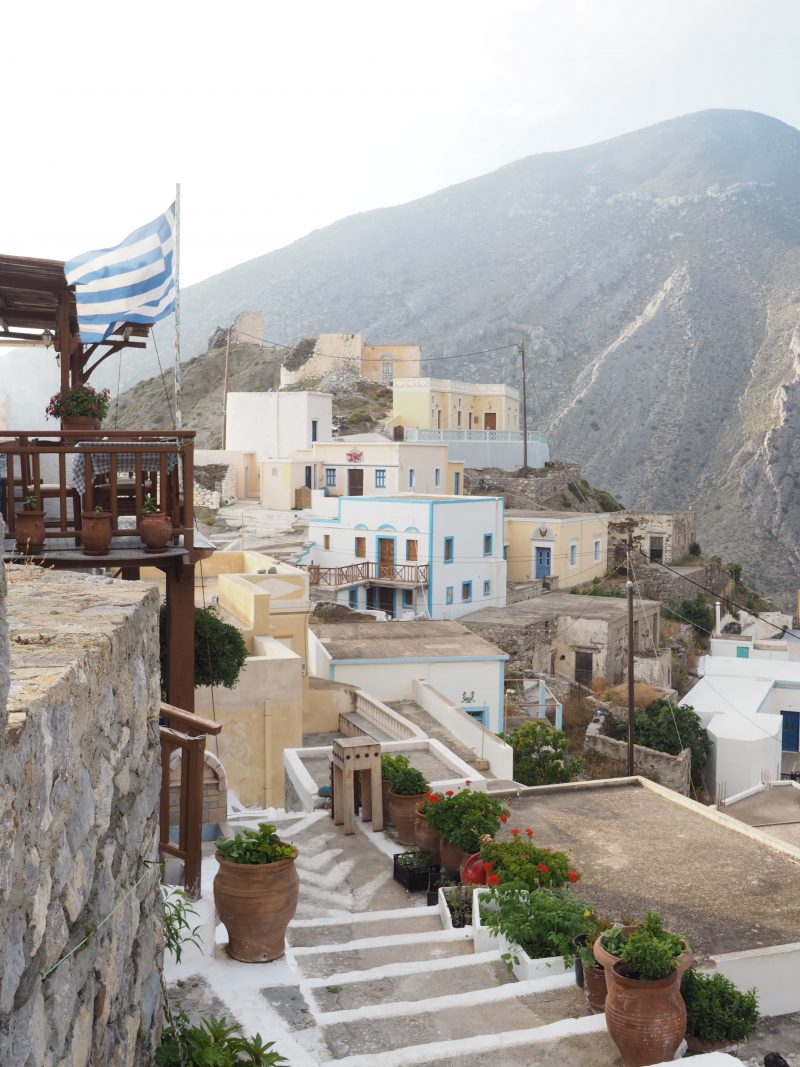 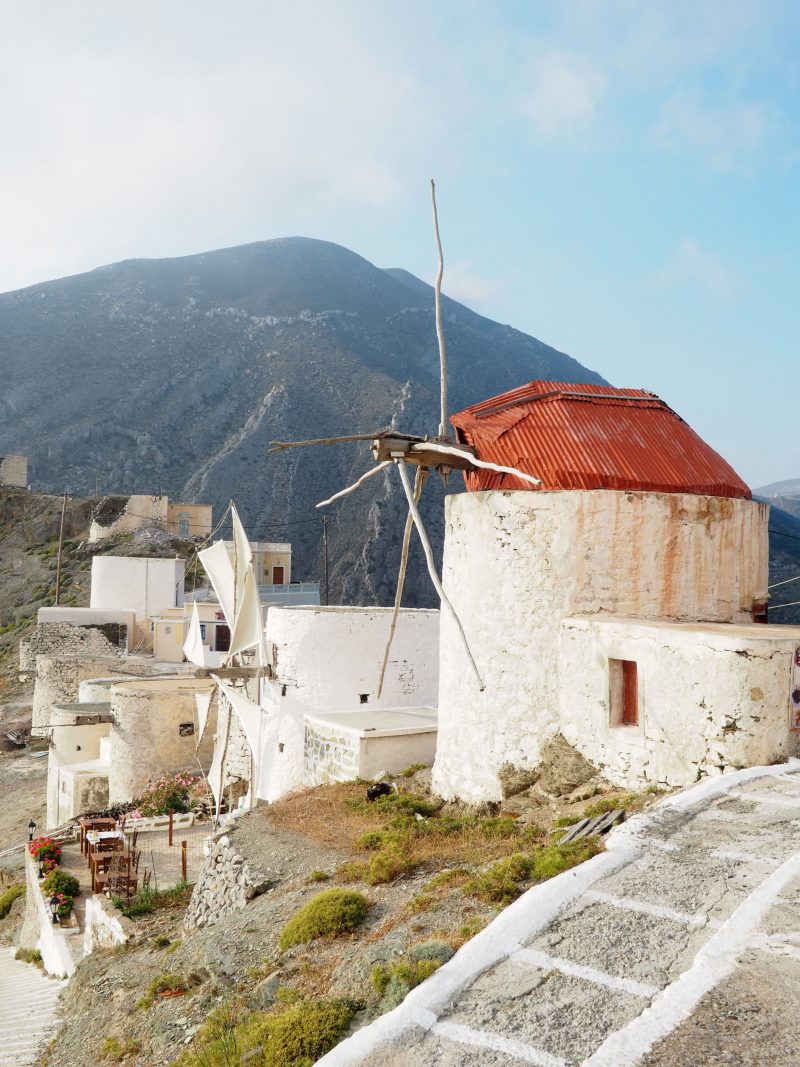 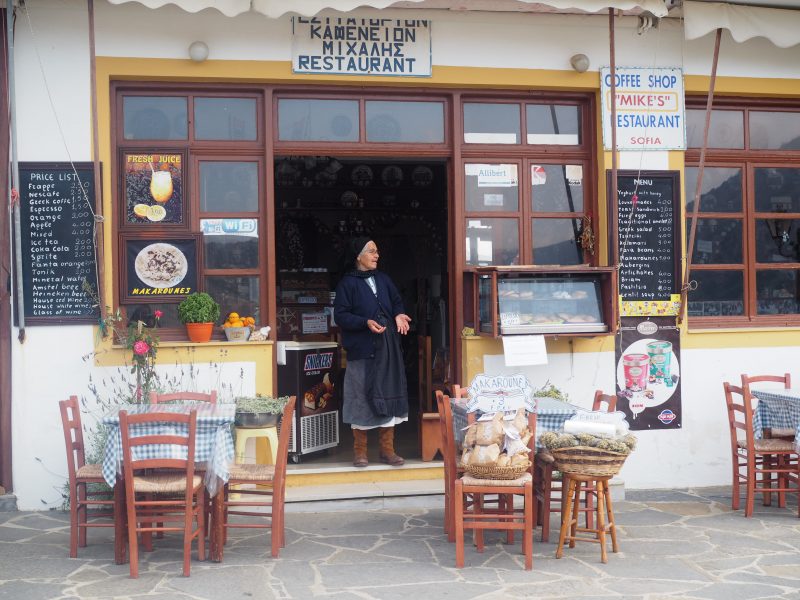 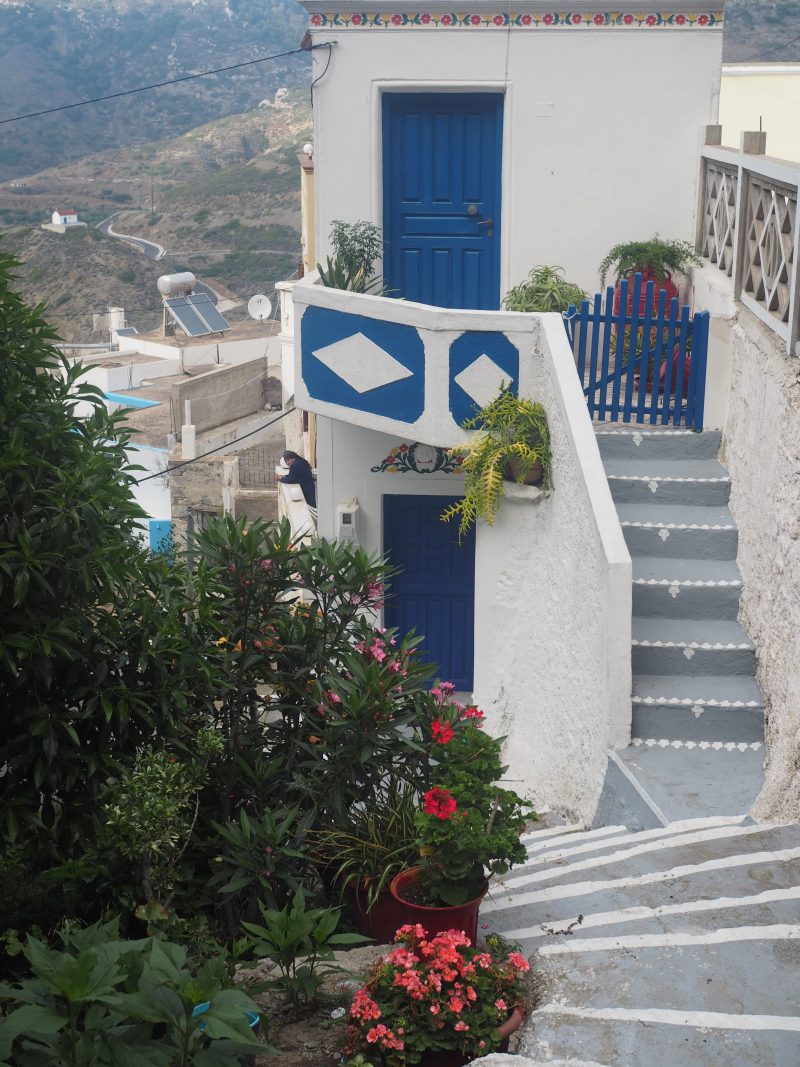 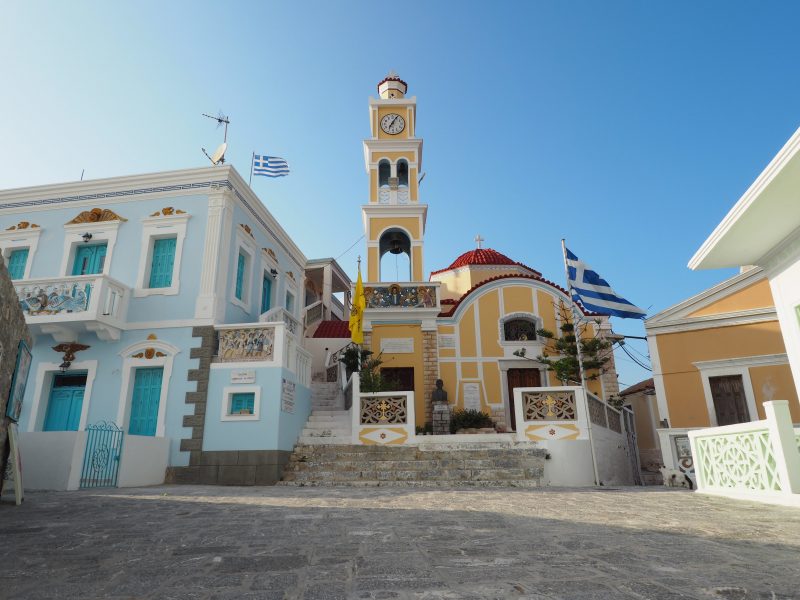 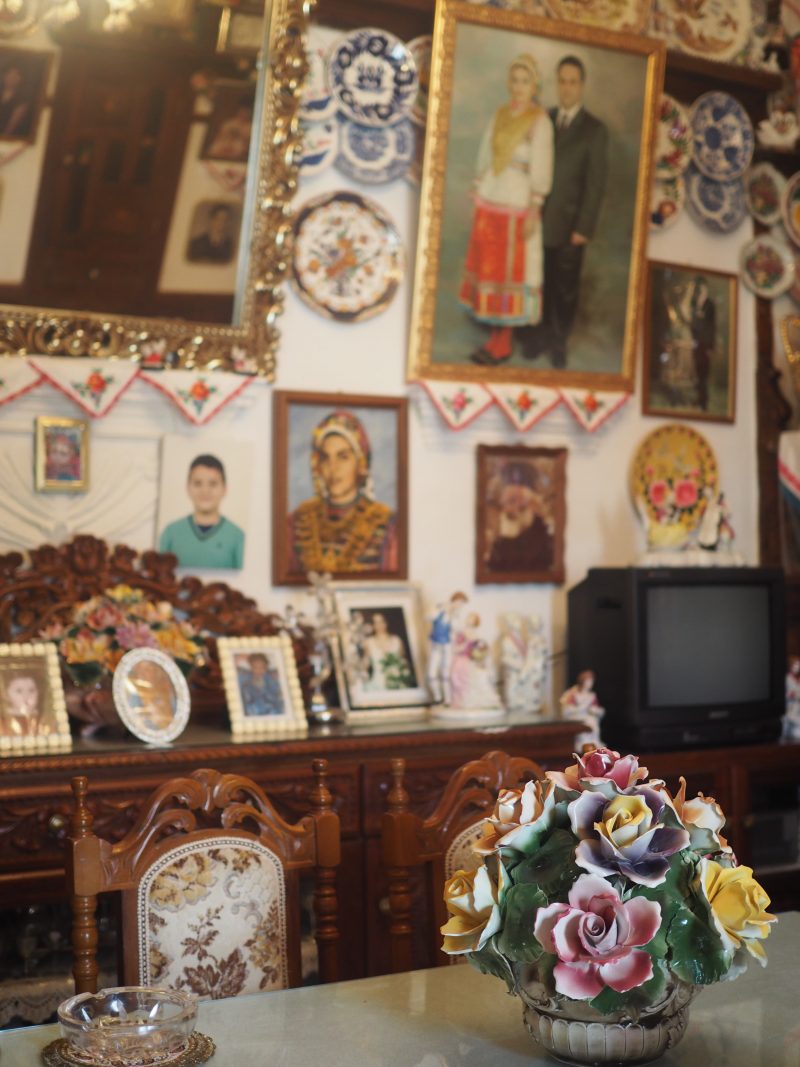 TIP : We also met with a local shoe maker who does handmade shoes. He will even measure your feet and do a shoe for you on the moment. While many of the greek sandals you see in Greece are actually made in China, here is a tip on where to buy the real Greek sandals. 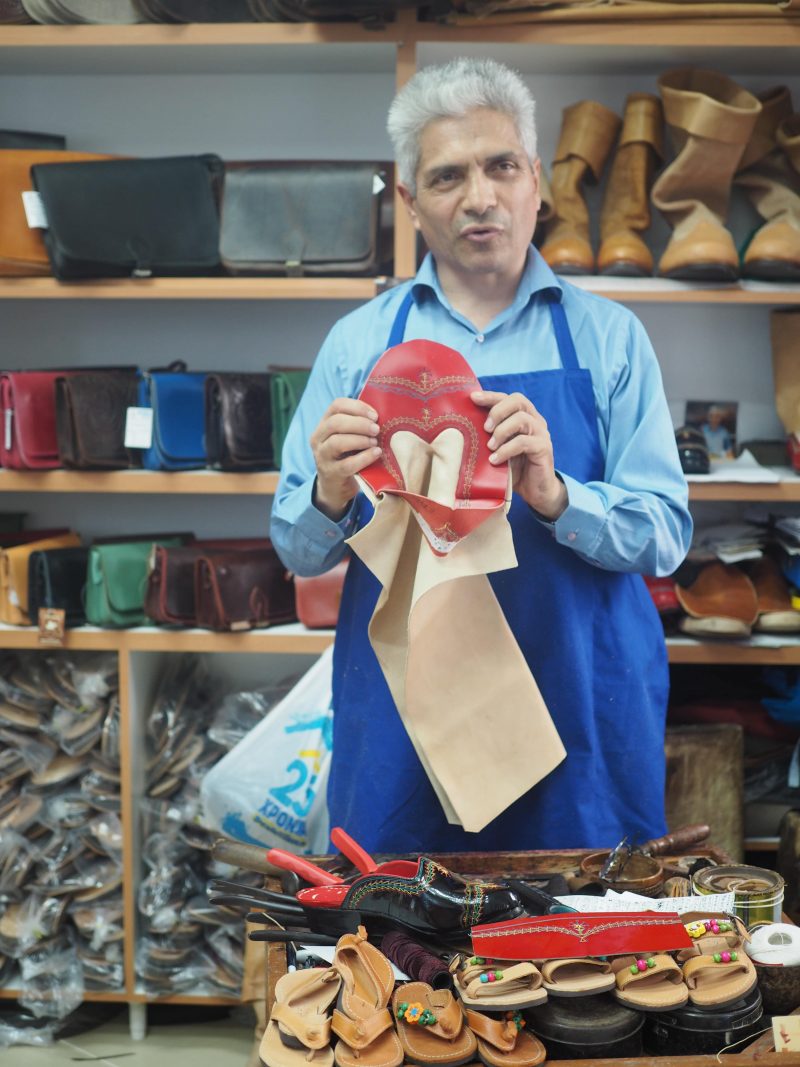 Finally, we had dinner in a restaurant belonging to the woman with the goat we met earlier that day. Her daughter cooked for us makaroùnes, the local pasta as well as other dishes that are typical from the Island of Karpathos. 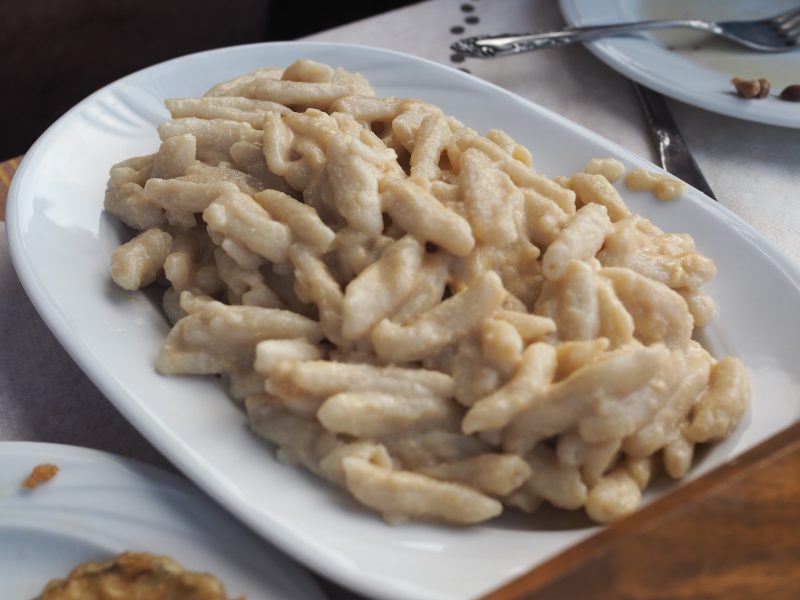 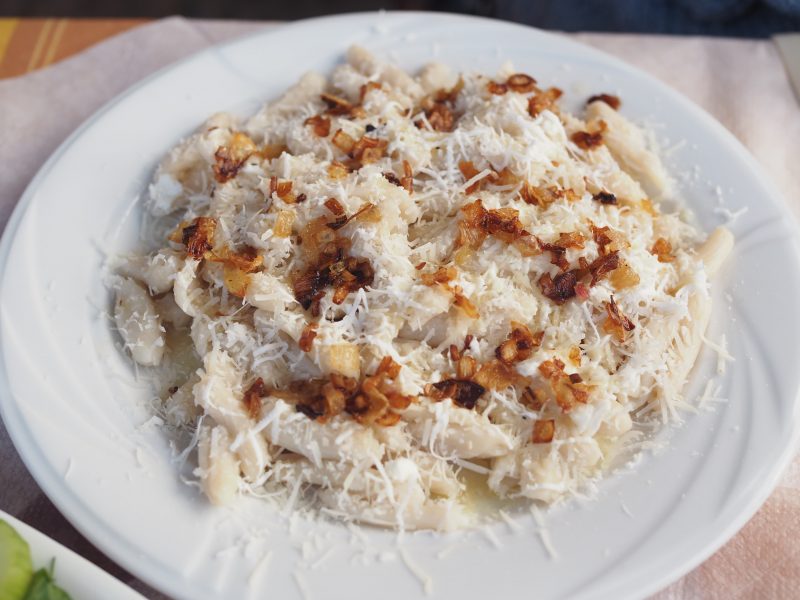 The North of Karpathos has been quite an amazing experience. It was all just about people and their tradition and history!

Stay tuned for my next article where I will talk about the rest of the island. It is definitely a good destination if you are interested on more than just laying at the beach!

*This trip was made possible thanks to Discover Greece.

**The opinions expressed here represent, as always, my own.