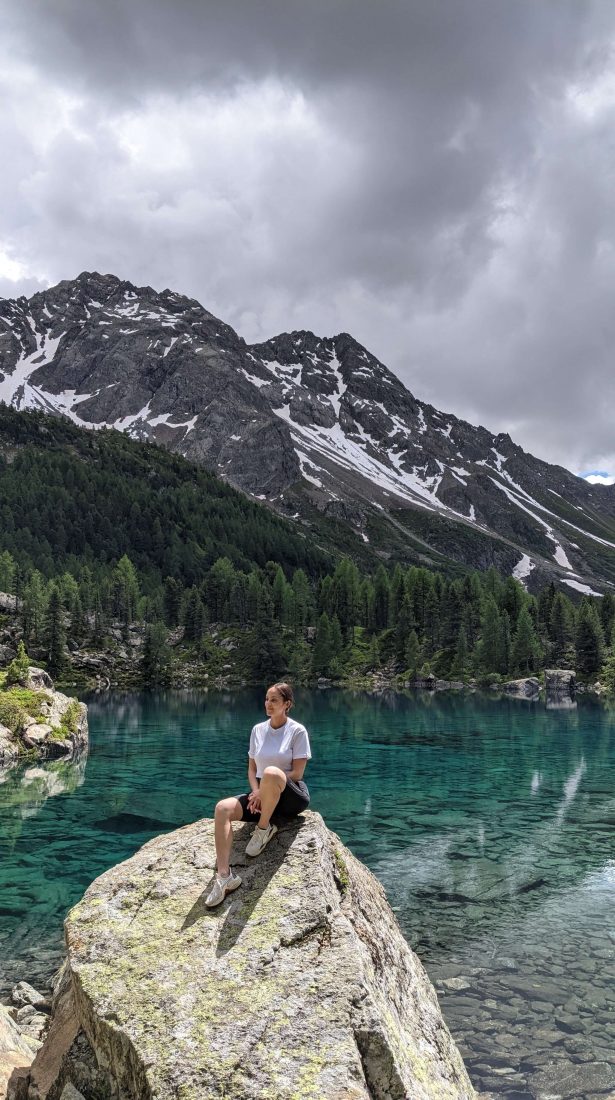 I recently spent one week visiting by train, Switzerland’s Italian regions and more precisely a part of Ticino, close to Locarno and Lugano and the Southern region of Graubünden: Val Poschiavo.

Traveling by train through Switzerland

Normally, when I decide to travel through several areas of a country, I plan to do a road trip because traveling by car is so convenient. However, I knew that traveling by train in Switzerland is super easy. First of all regions are super well connected and the view you get from the train is often much more spectacular than if you were traveling by car. Actually, when I first went to Zermatt a few years ago, it was the train ride to the village that I found the most amazing part of the trip. Of course, the village was super nice as well but never before I had taken such a beautiful train journey.

There are several options to travel through Switzerland by train. We got a Switzerland travel pass that allows you to travel on all trains in Switzerland but also on local buses. Depending on the region, you can also book a train journey on one of the special scenic trains. For example, in Val Poschiavo we also traveled for a short journey on the Bernina line that is part of UNESCO World Heritage. More on that later.

Starting our trip in the Ticino region

From Zürich, we took a 4 hours train journey to Locarno. Locarno is one of the cities bordering Lake Maggiore (Lago Maggiore), and definitely has a Mediterranean flair with its colorful houses and palm trees.

It is the perfect base if you want to discover the Ticino Region. From there you can quickly reach the many sightseeing spots around the lake but also in the neighborhood mountains.

For the ultimate experience in the region, book a night in nature at one of the Millions Stars Hotel!

Lago Maggiore is a very big lake situated in both Italy and Switzerland for the northern part. Being that big, there are plenty of activities to do, similar to those you would do if being somewhere by the seaside. A few examples, going on / renting a boat, swimming, or doing water sports activities such as we did. We spend our first evening Stand up Paddling on the lake.

Ascona, one of the most beautiful villages around Lake Maggiore

Back from our trip to Brissago island, we had a stroll in the town of Ascona that is one of the most beautiful villages around the lake. With its colorful houses and any restaurant facing the lake, it has a very laid-back Mediterranean flair. If you are there don’t miss taking a picture on the “Swing the world”  that is a project by a young couple. They decided to put swings in the most beautiful places around Ticino.

Finally, if you are not scared of climbing 800 stairs, ( I recommend you climb them down and not up), you can take a walk on Monte Verita to Ronco. It has very beautiful views over Ascona and Lake Maggiore (Another reason to climb it down and not up;)) 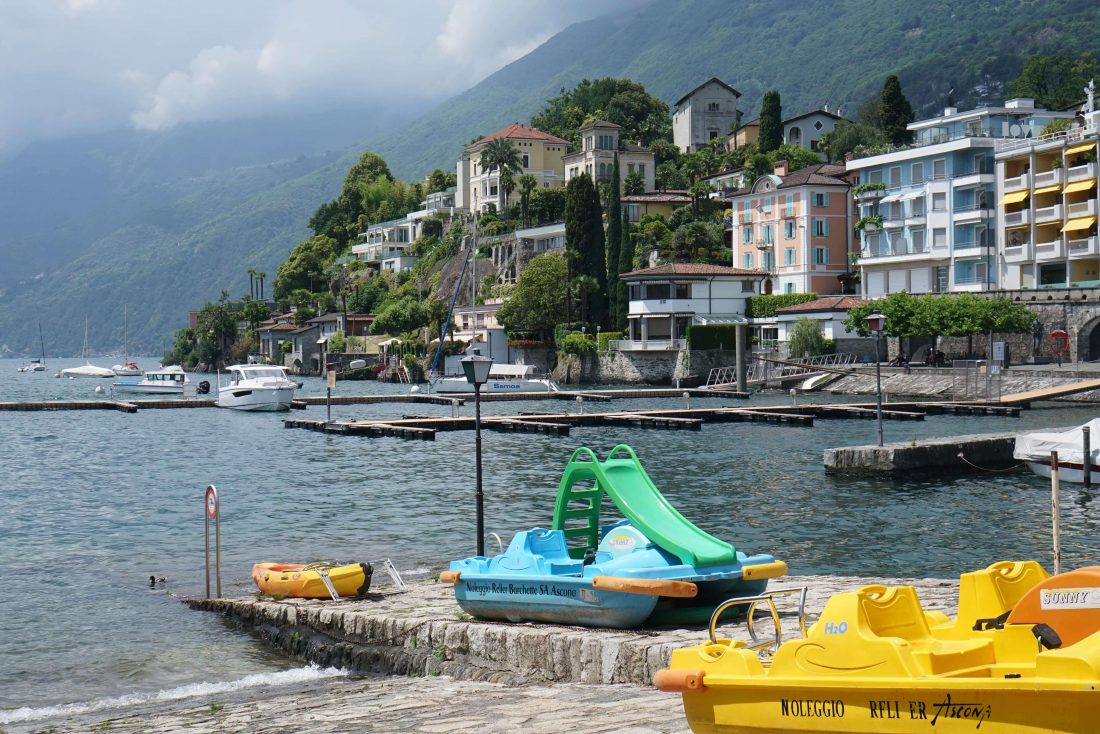 Spend the day in Lugano

At first, we planned to spend the day in Lugano because it is one of the most beautiful villages on Lake Maggiore. However, we ended up going for another day trip as it was quite hot and we rather stayed in nature instead.

As mentioned before, Locarno is a perfect starting point if you want to visit the Ticino region. Therefore, on the day we planned to go to Lugano, we went instead to Val Verzasca and more exactly to Pontei de Salti that is famous for its medieval bridge and its clear Verzasca River that origins from the melted snow of the nearby Alps. It is not only a stunning place to visit but also the perfect spot to refresh on a hot summer day. If you have a bit of time. You can start a hiking trail from there and explore a bit more in-depth the Val Verzasca area. 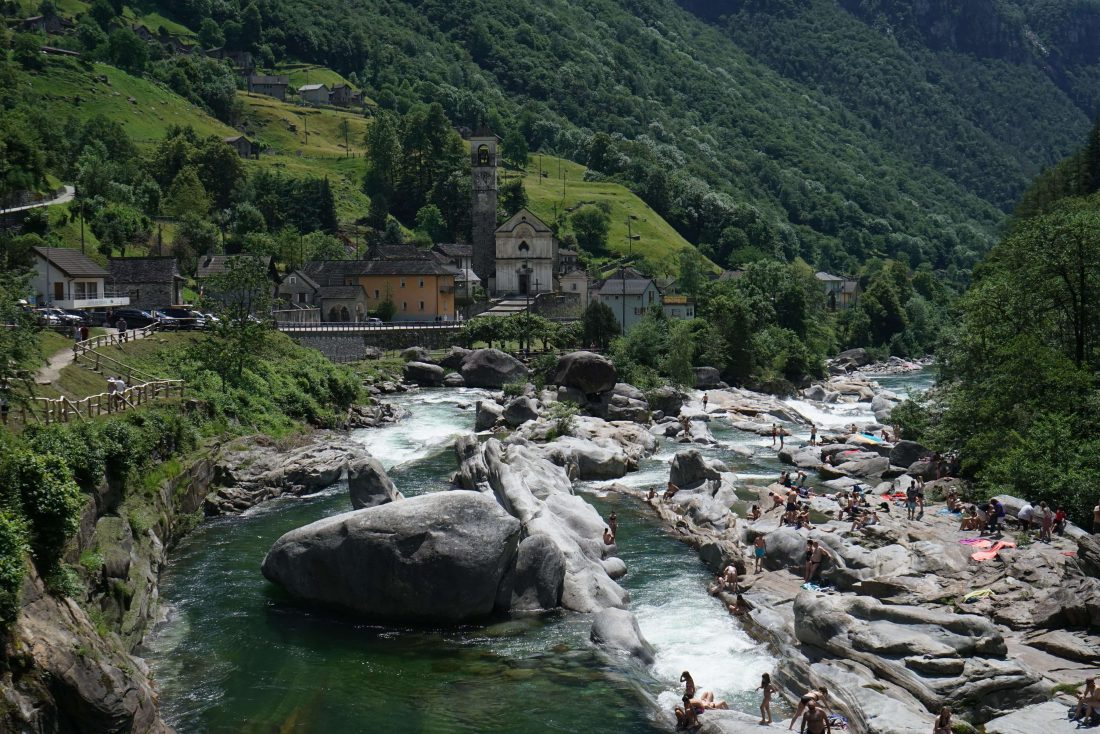 After a few days in Ticino, we decided to keep exploring the Italian-speaking part of Switzerland. We traveled to Val Poschiavo and you literally travel from palm trees to glaciers. We took the long way through Switzerland because of the actual Corona restrictions but the best from Ticino to go to Val Poschiavo is to take the train going through Italy. If you have the chance, book a spot on the Bernina Express. The big windows on the train allow spectacular views over the Val Poschiavo valley. We took it from Poschiavo to Alp Grüm, and it was spectacular!

Our first stop in Val Poschiavo was the village of Poschiavo. We slept in a monastery for 2 nights and it was our base to discover the area. The village is very cute is full of history and still has this Meditteranean flair that you won’t find anywhere else in the region anymore.

While in Poschiavo, you should go see Laggo Poschiavo and have a drink / Dinner at Hotel Le Prese, the most beautiful hotel in the area. The food in Val Poschiavo is excellent. It is a mix of Italian and Swiss mountains dishes. The food at Hotel Le Prese was delicious, as well at Hotel Albrici on the main square in Poschiavo. They have delicious local specialties.  Such as pizzoccheri, aka traditional buckwheat pasta, readily prepared with vegetables and cheese, the capunet, small spinach gnocchi, dried meats and other cured meats. 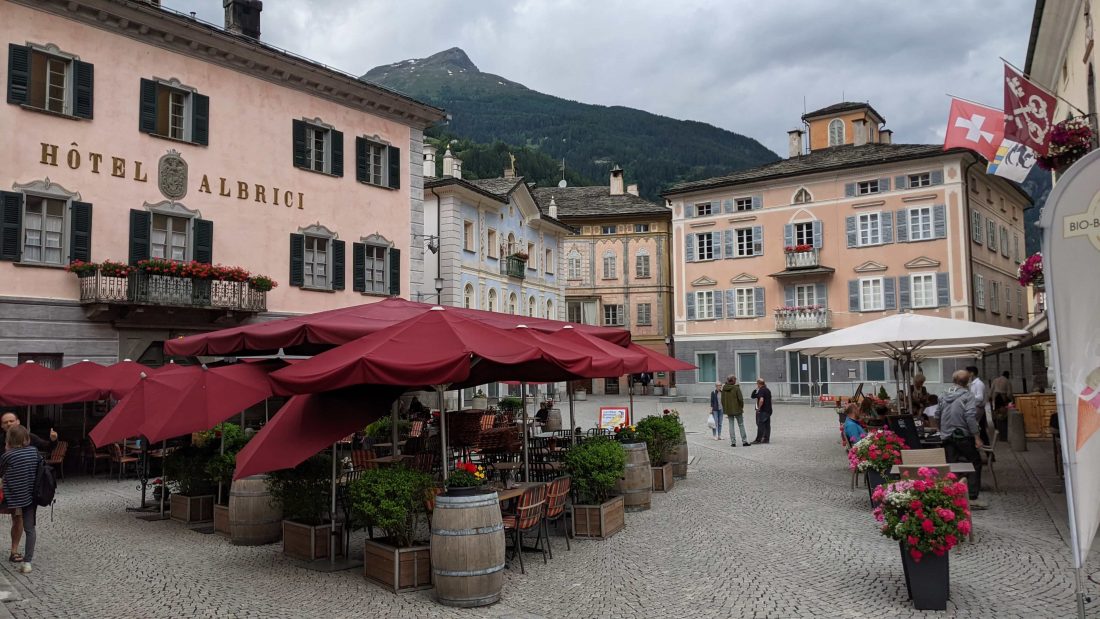 From Poschiavo we decided to go on a hike in the nearby Val da Camp. We wanted to take a bus from Sfazu to Alp Camp but unfortunately, the bus was full even though we booked ourselves in advance. It turned out it was best as if you are fit it is a really nice hike up to Alp Camp. It took us around 2 hours with picture stops and once at Alp Camp we had a small snack in one of the mountain hut before going down toward the other side. On the way back, we discovered the breathtaking Lago di Saeseo and Lago da Viola. Those lakes have the typical turquoise color of the many lakes of the Grisons region! I already visited a part of this region both in winter and summer where I could see these beautiful kinds of lakes.

After our two nights in Poschiavo, we took the Bernina Express to Alp Grüm. This station is only accessible by train. It was lovely to sleep there as once the last train goes, you have all the mountain views for yourself!

In the morning, we hike to Palu lake, a heart-shaped lake of turquoise colors, and to Cavaglia to visit the glacier garden. There you can observe giant pots that are the result of “a natural phenomenon: over the course of thousands of years, gravel and debris, transported by the pressurized glacial water, have ground giant holes into the bedrock.” 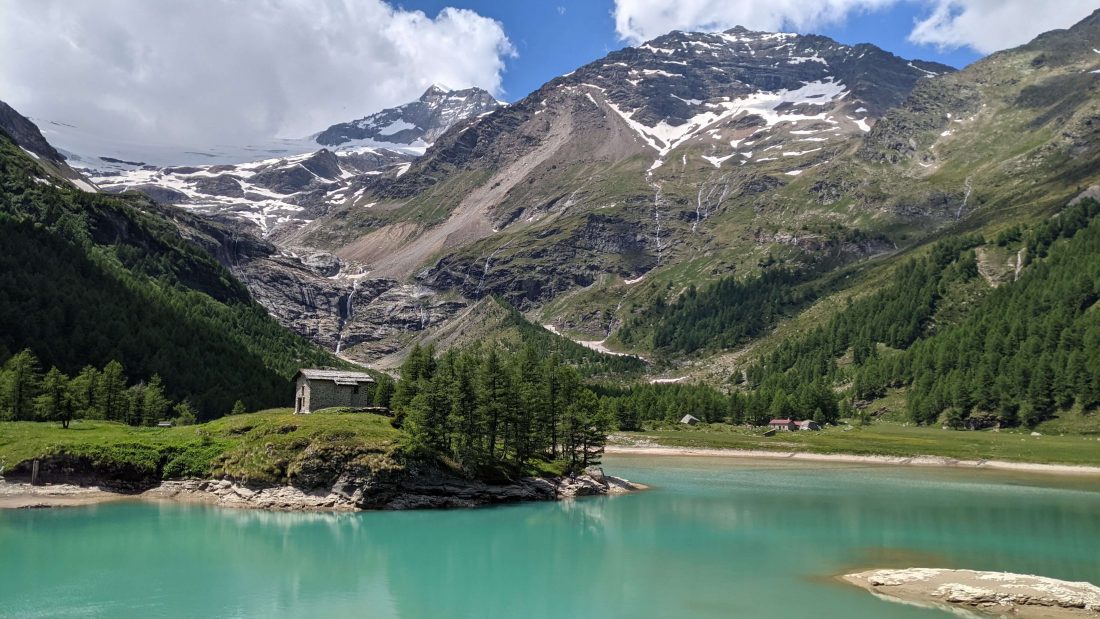 On our last day, we took the train to Ospiza Bernina for a quick stop before going back to the airport. This is the highest train station in the region. From there we could still see snow in June! We were literally glacier high! Definitely, a fabulous way to end this Switzerland trip!

I have heard from many people that the Italian-speaking part of Switzerland is one of the most beautiful parts of Switzerland. I couldn’t agree more. Of course, I haven’t visited all of Switzerland yet, but this trip was beyond beautiful! A special place on this earth!