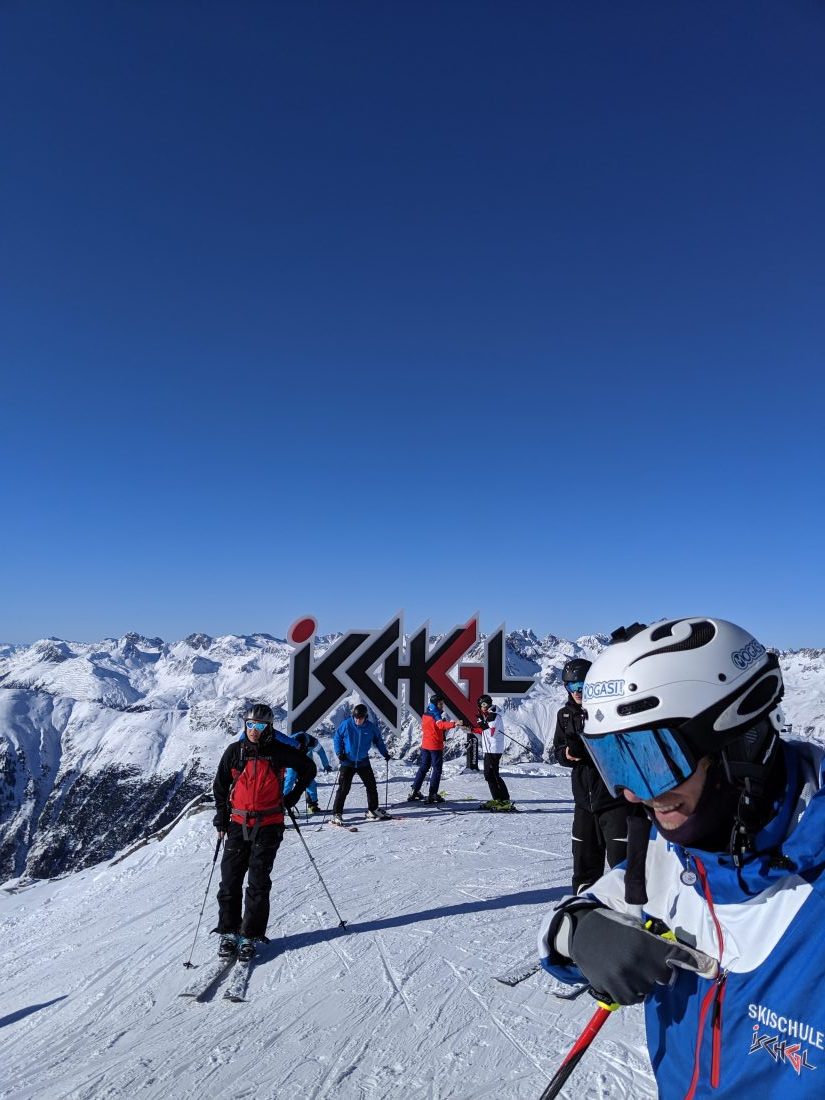 In this Ischgl blog I am sharing my experience of my first time in Ischgl. Ischgl is a ski resort in the Paznaun Valley in Tirol, Austria. More than a ski resort, Ischgl is a lifestyle, most enjoyed by 30+ because of it’s price!

Even if not everyone is skiing in Ischgl, this is the reason why we came there in the first place. The first thing that impressed me the most in Ischgl was how large the ski slopes are. I skied in a few places in Austria, St Anton, Warth, Kirchberg in Tirol, Achensee, but I haven’t seen such large slopes anywhere else. For people who are not great (yet) at skiing it is perfect and in general I find large slopes great to ski especially in the high season when it gets crowded.

Not only the slopes are large they are also very long. In total the Silvretta Arena Ischgl Sammaun is 239 kilometers of pistes and some brand new speed lifts with seat heating, and weather protection that make your ski day very comfortable!

As Ischgl is situated close to the Swiss border, it is possible to ski to Switzerland. One of the most famous destination is Sammaun where you can shop duty free items! Pay attention though, this is not very legal and you can be controlled on your way back!

The three different “smugglers routes” take you to Switzerland. The name comes from the fact that people would go to Switzerland to buy goods tax free and resell them later in Austria via this mountain range. The “smugglers routes” are for all level. Gold for very good skier, is 61.8km and takes you to around 4 hours. Silver is 41.4km long, it will take you 3,5 hours and is best for intermediate skiers. Bronze is for beginner skiers of people who want to take it easy as it has mostly blue slopes. The run is here also 4 hours long and 40.2km.

PS : If you download the Ischgl App you can check in at some points during the circuit and take part in a raffle.

If you would like to see the whole resort. You will need a minimum of 3 days on the slopes.

Free riders might also be happy to know that Ischgl is an off piste paradise as told us our ski guide. Best is to take a guide with you if you would like to explore it. There is also a Snow Park at Idalp station for who wants to practice tricks.

Food lovers will love Ischgl as it has many great food options both on the slopes and in the village. While in many ski resort the food is rathe questionnable, Ischgl has some great restaurants up the mountains. We ate at Pardorama, at the à la carte restaurant. The building is very impressive made out of glass and on top of the mountain, the view is incredible especially when it’s sunny! Food was great as well! (Accessible also directly from Ischgl with the gondola if you don’t ski ;))

On the next day we ate at Alpenhaus aka the Mountain VIP Club (membership club) where you can spot celebrities close by the fireplace. Before I talk about the restaurant, I was so surprised to hear how popular the Mountain VIP club is. There is a waiting list for people who wish to be members. I was thinking this only exist in cities like New York or berlin but it seems it also exist in Ischgl too. Lifestyle we said!

Back to the food, Alpenhaus is a very good restaurant, it was awarded 1 toque by Gault Millau 2020 which speaks for itself!

Ischgl actually has the most awarded restaurants in Tirol. It has 9 restaurants with Gault-Millau toques. If you are a food lover don’t miss the gastronomy WM event in April.

Aprés Ski and party in Ischgl

Ischgl’s slogan is “relax if you can”. Well you will not be able to 😉 Indeed, after a day of skiing you must try the famous après ski. It is a huge thing in Austria and we even met some people who came to Ischgl just for the après ski 😀

Après ski in Ischgl can be VERY crowded and it is best to take a reservation ( yes you hear me right). For traditional après ski, Paznaue taja on the slopes is your best bet from 2pm until 4pm and in the village : Kuhstall and Trofana Alm where they play traditional Après ski music. For Germans, Nikki Stadl plays German Schlagger music.

If you are not so much into this kind of music and atmosphere, you might prefer Winkler and Fire & Ice.

For those who like it a bit fancy, there is also the wine bar and the Champagner Bar and Champagner Hütte where you can purchase bottles for 38K Euros 😀

As you can see there is not time to be bored in Ischgl. There is all of this and more : cross country skiing, snow shoe walk, winter hiking, ski touring, wellness and for adrenalien junkies : the Ischgl SkyFly where you literally fly down to the valley. I did not do it as I was too scared. I would have maybe one it with my friend but she was busy skiing. Next year!!!