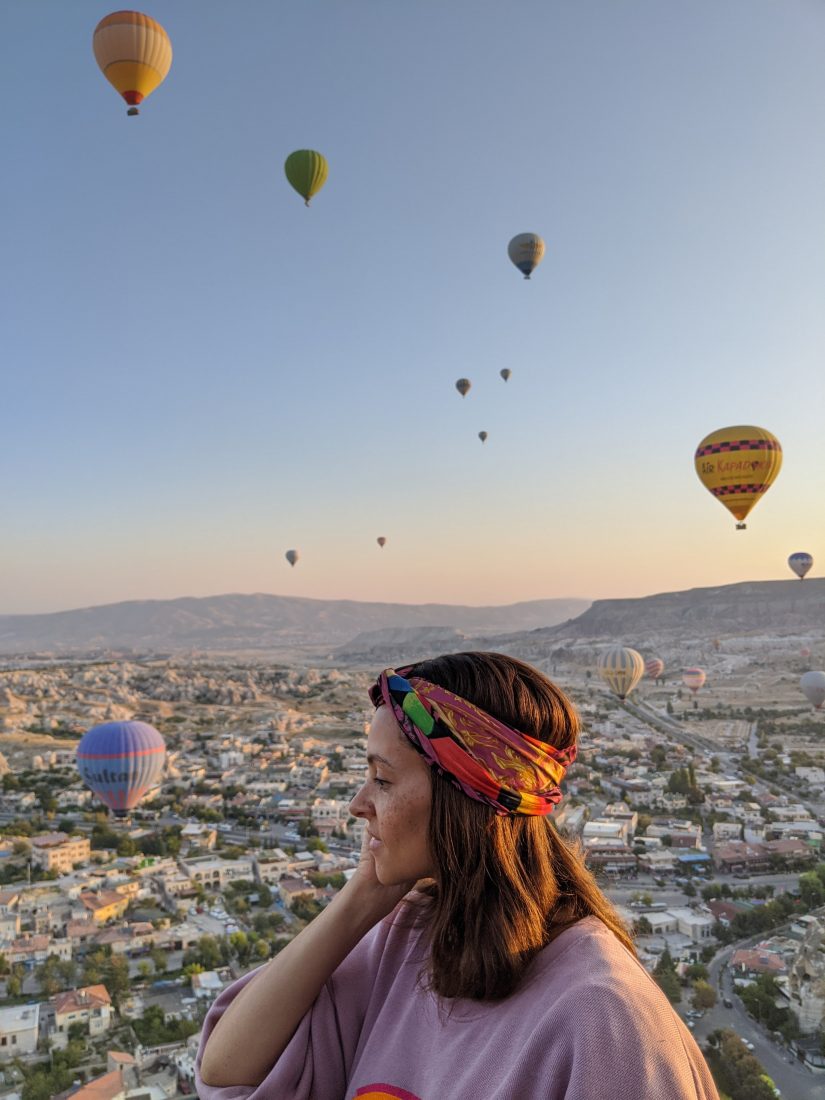 We wondered for a long time whether we were going to go to Cappadocia. Then, as we traveled, people told us that this region was a must see in Turkey and that we absolutely had to go. So we took the plunge. I was worried that Cappadocia was an Instagram tourist trap given all the photos of the hot air balloons online but in fact not at all !!! It is simply an amazing destination.

For the record, Cappadocia is a region that was formed by a volcanic eruption. This has created rocks in the shape of chimneys that makes it so characteristic. A tribe from the Caucasus built homes inside these chimneys, but also churches for the first Christians in the region and new underground cities, linked together by a network of galleries. The place reminded me a lot of Kandovan in Iran which I visited last year.

If you want a hot air balloon for a romantic flight, it is possible to privatize it but the price can go up to 2000 Euros.

Tip! You must book your flight a few weeks in advance. You can book through your hotel, a travel agency or by yourself online (cheaper) or by sending an email to the different companies. We chose Turquaz for our experience, which I can recommend.

Other activities in Cappadocia

If you don’t experience a hot air balloon ride in Cappadocia, there are plenty of activities in Cappadocia to choose from.

The best way to visit Cappadocia is to take a hike. No need to book anything. Go there directly and start walking. You will see the old dwellings and churches in the caves. There are also some super nice little cafes along the way.

We started with a short hike in pigeon valley. It is called like that because of the dovecotes dug in the rocks. It is a not very difficult and not very long hike with veautiful views of Uchisar. You will walk between the caves before arriving in the village of Gorëme.

Watch the sunset in Cappadocia in the pink valley

Another wonderful hike is in the Rose Valley which is the best place to watch the sunset in Cappadocia. Take a stroll and don’t miss the Church of the Crosses hidden in one of the caves! You will not miss it because there is a cafe in the same place which serves tea and fruit juice.

As you can see, the rocks in this part of Cappadocia look like penises which explains the name of Love Valley.

We did not do this hike but it is quite famous because it starts from a viewpoint also accessible by car where you will find the famous heart swings but also cafés, etc

If you don’t like walking, you can go for a horseback riding in Cappadocia. It will take you in the same places where it is possible to hike : Pigeon Valley, Love Valley and Rose Valley. We opted for this option, because it is just a change of activities in Cappadocia. Just be careful if the horses are treated well! Horseback riding in Cappadocia is done either at dawn to see the hot air balloons or at sunset. We for sunset in the Rose Valley. Magnificent!

In addition to cave constructions, the inhabitants of the time had also built underground cities to protect themselves from invasions. It is possible to visit these cities, the main ones being Derinkuyu and Kaymakli. It is a really interesting attractions in Cappadocia especially to see the advanced defense systems. A bit off the beaten track.

If you want to learn more about Christians in Cappadocia, head to the Goreme Open Air Museum. You will see churches, chapels and monasteries carved into the rock as well as typical dwellings.

If you want to learn more about the history of Cappadocia, you can take two tours that will teach you more: The Green Tour and the Red Tour. Convenient because transportation is included so you won’t need to worry about anything.

Although Turkey is a predominantly Muslim country, Cappadocia has one specialty and that is wine. This is because it was a Christian region. You will see a lot of vineyards in the region. So why not do a Cappadocia wine tasting ?! A rather sweet and smooth wine.

I absolutely wanted to try the Testi kebab or pottery kebab in Cappadocia as it is THE gastronomic specialty. As the name says, the meat is cooked in pottery over a stone oven. It’s really super good. We tried it in the great restaurant which is Dibek in Gorëme. The prices are very correct and you will eat seated on the floor in the traditional way.

Where to sleep to visit Cappadocia?

For our trip to Cappadocia we decided to sleep in Ürgüp to avoid the many tourists who are in Gorëme. We were at Hotel Fresco, the first eco-friendly hotel in Cappadocia. From there, if you book activities, you will have a pick even in Ürgüp or you can take a taxi to go for dinner or your hiking spots. Ürgüp has very nice hotels but the downside is that you will not be able to witness the hot air balloons in the morning. If this is what you are looking for, better to stay in Gorëme even if it is more touristy. The most beautiful hotels are: Museum hotel, Argos and Sultan cave suites.

Finally, it is also possible to go camping in Cappadocia. A unique experience because they are located in the heart of nature and you will sleep under the stars!

How to get to Cappadocia

To visit Cappadocia you can get there by plane or by bus.

From Istanbul there is a direct flight to Kayseri. From the airport you can take a bus or a transfer for an hour to reach Gorëme. Here too I advise you to take Pegasus, your cheapest option.

The closest airports to Cappadocia are Kayseri and Aksaray.

We arrived in Cappadocia from Antalya with an overnight bus. You save one night in a hotel but I don’t recommend it because the bus stops very often and therefore it is difficult to sleep.

A visit to Cappadocia in Turkey truly a once in a lifetime experience. With so many activities to do in Cappadocia, it is a destination suitable for all ages.

This was the last stop on our trip to Turkey.

Find all my articles on Turkey:

Road Trip in the North of Turkey,

My stay at the Hillside beach resort,

Review of the Shangri La in Istanbul,

Day trip from Istanbul to the Prince’s islands